At the very heart of applications such as quantum cryptography, computation and teleportation lies a fascinating phenomenon known as “entanglement”. Two photons are entangled if the properties of one depend on those of the other, whatever the distance separating them. A new source of entangled photons twenty times brighter than all existing systems has been developed by a team from the Laboratoire de Photonique et de Nano-structures (LPN) of CNRS. This novel device is capable of considerably boosting the rate of quantum communications and constitutes a key component in future quantum logic processes. These results are published in the journal Nature on the 8 July 2010.

Take a photon in Paris and another in Tokyo: if they are “entangled”, they are interdependent and measuring the properties of one makes it possible to know the properties of the other instantly, whatever the distance separating them. This mysterious property, known as “entanglement”, has far reaching application potential in information fields such as quantum cryptography, quantum computation and quantum teleportation. Normally, researchers use sources of entangled photon pairs that are easy to put in place (a laser transforming a photon into two photons of different color) but with very low brightness: less than one pulse out of 100 actually contains a pair of entangled photons, which considerably restricts the rate of any quantum communication. In addition, the size of such sources means they cannot be easily integrated into microsystems.

A team from the Laboratoire de Photonique et de Nano-structures (LPN) of CNRS has developed a light source of entangled photons twenty times brighter than all existing systems. The researchers have invented a novel “photonic molecule” system in which a semiconductor quantum dot(1) emits a pair of entangled photons per excitation pulse. This photonic molecule constitutes a trap for each of the photons of the pair and allows them to be collected efficiently. This new source operates at a rate of one pair of photons collected every 8 pulses (compared to less than one pair every 100 pulses so far). In the long run, the researchers should be able to reach a rate close to one pair of photons per pulse. This device could make it possible to manufacture electroluminescent diodes of entangled photon pairs, with rates close to one gigahertz (in other words around on billion hertz). Moreover, the LPN scientists have also shown that the use of this “photonic molecule” concept allows the quality of the entanglement of the emitted photon pairs to be improved. 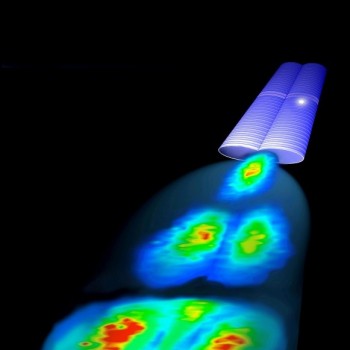 This image represents, in the top right hand corner, the new component produced in this experiment: two pillars of micrometric size are coupled to form the “photonic molecule”.
The semiconductor quantum dot (of nanometric size) is inserted into one of the pillars (visible as the bright spot in the right hand pillar). The lower part of the image shows the radiation pattern of the entangled photons emitted by the component.