A strong limitation of linear optical quantum computing is the probabilistic operation of two-quantum bit gates [2] based on the coalescence of indistinguishable photons. A route to deterministic operation is to exploit the single-photon nonlinearity of an atomic transition. Through engineering of the atom-photon interaction, phase shifters, photon filters and photon-photon gates have been demonstrated with natural atoms. Proofs of concept have been reportedwith semiconductor quantum dots, yet limited by ine_cient atom-photon interfaces and dephasing. We have fabricated a highly efficient single-photon filter based on a large optical non-linearity at the single photon level, in a near-optimal quantum-dot cavity interface. When probed with coherent light wavepackets, the device shows a record nonlinearity threshold around 0.3 incident photons. We demonstrate that directly reected pulses consist of 80% single-photon Fock state and that the two- and three-photon components are strongly suppressed compared to the single-photon one.

Figure : (a) Measured and (c) calculated reflectivity of a 125 ps coherent pulse (resonant at the QD transition) as function of the incident average photon-number. The straight lines in panel (a) are guide to the eyes showingthe nonlinear threshold. (b) Measured and (d) calculated time-integrated second-order correlation function, g(2)(0), asa function of average photon number. (e) Fraction of single photon (black symbols) and of coherent light (open symbols) in the reflected beam. 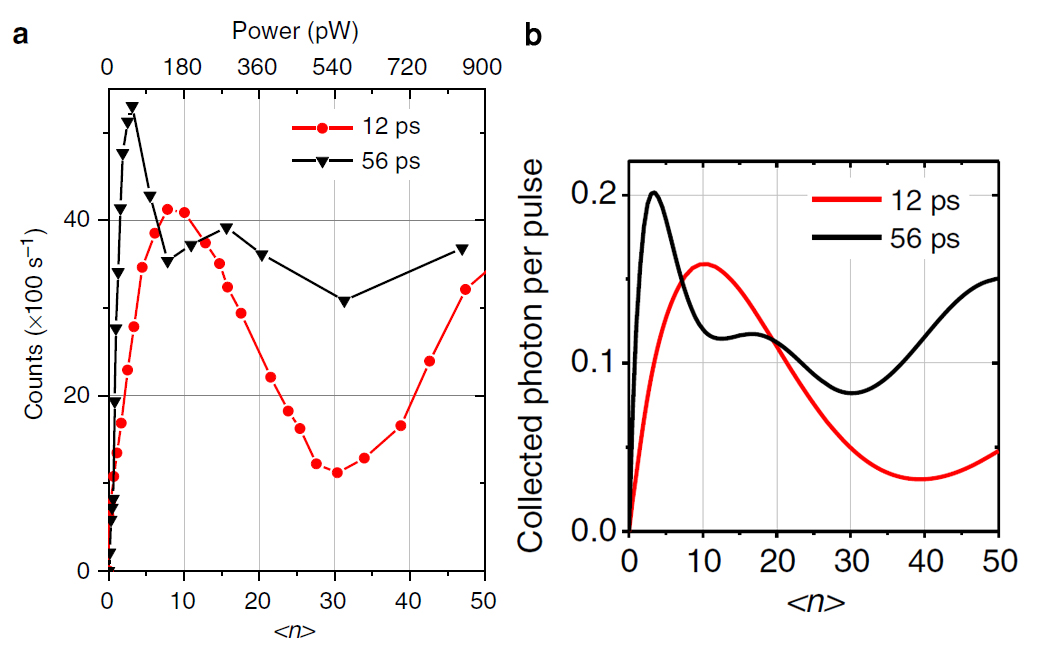 “Let there be light! One particle per time.”

An article about LIGHT written by Niccolo Somaschi and Nathan Shamman for the journal “The Conversation” (France).

To be found here.

The desiderata for an ideal photon source are high brightness, high single-photon purity, and high indistinguishability. Defining brightness at the first collection lens, these properties have been simultaneously demonstrated with solid-state sources; however, absolute source efficiencies remained close to the 1% level and indistinguishability had only been demonstrated for photons emitted consecutively on the few-nanoseconds scale. We demonstrate solid-state single-photon sources with scalable performances. In one device, an absolute brightness at the output of a single-mode fiber of 14% and purities of 97.1%–99.0% are demonstrated. When nonresontantly excited, it emits a long stream of photons that exhibit indistinguishability up to 70%—above the classical limit of 50%—even after 33 consecutively emitted photons with a 400 ns separation between them. Resonant excitation in other devices results in near-optimal indistinguishability values: 96% at short timescales, remaining at 88% in timescales as large as 463 ns after 39 emitted photons. The performance attained by our devices brings solid-state sources into a regime suitable for scalable implementations. 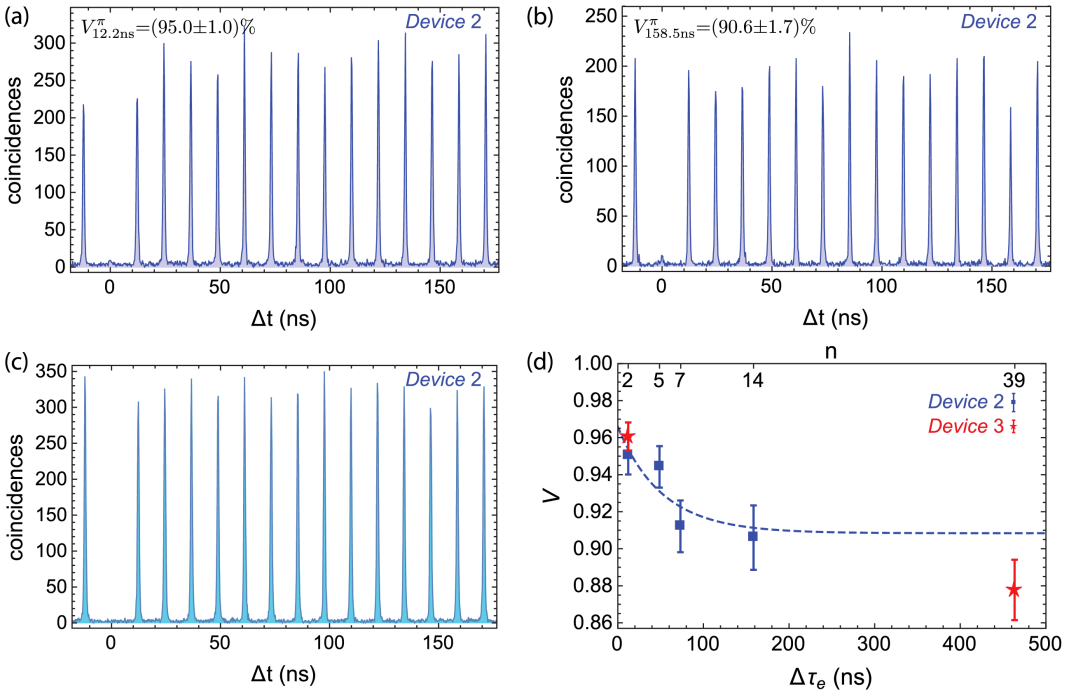 Figure: Temporal-dependent indistinguishability under strictly resonant excitation. Two-photon interference histograms with Device 2 of parallelly polarized photons at (a) Δt=12.2  ns and (b) Δt=158.5  ns, under a pi-pulse preparation. (c) Second-order autocorrelation measurement at pi-pulse. (d) Indistinguishability between a first and n-th consecutive emitted photon for two. Indistinguishability remains robust in the temporal domain, decreasing only by 4.4% in 159  ns or by 8.3% in 463  ns.

Follow the link below to listen to the full show:

Our recent paper published on Nature Photonics (doi:10.1038/nphoton.2016.23) gathered some attention from several online and journals: 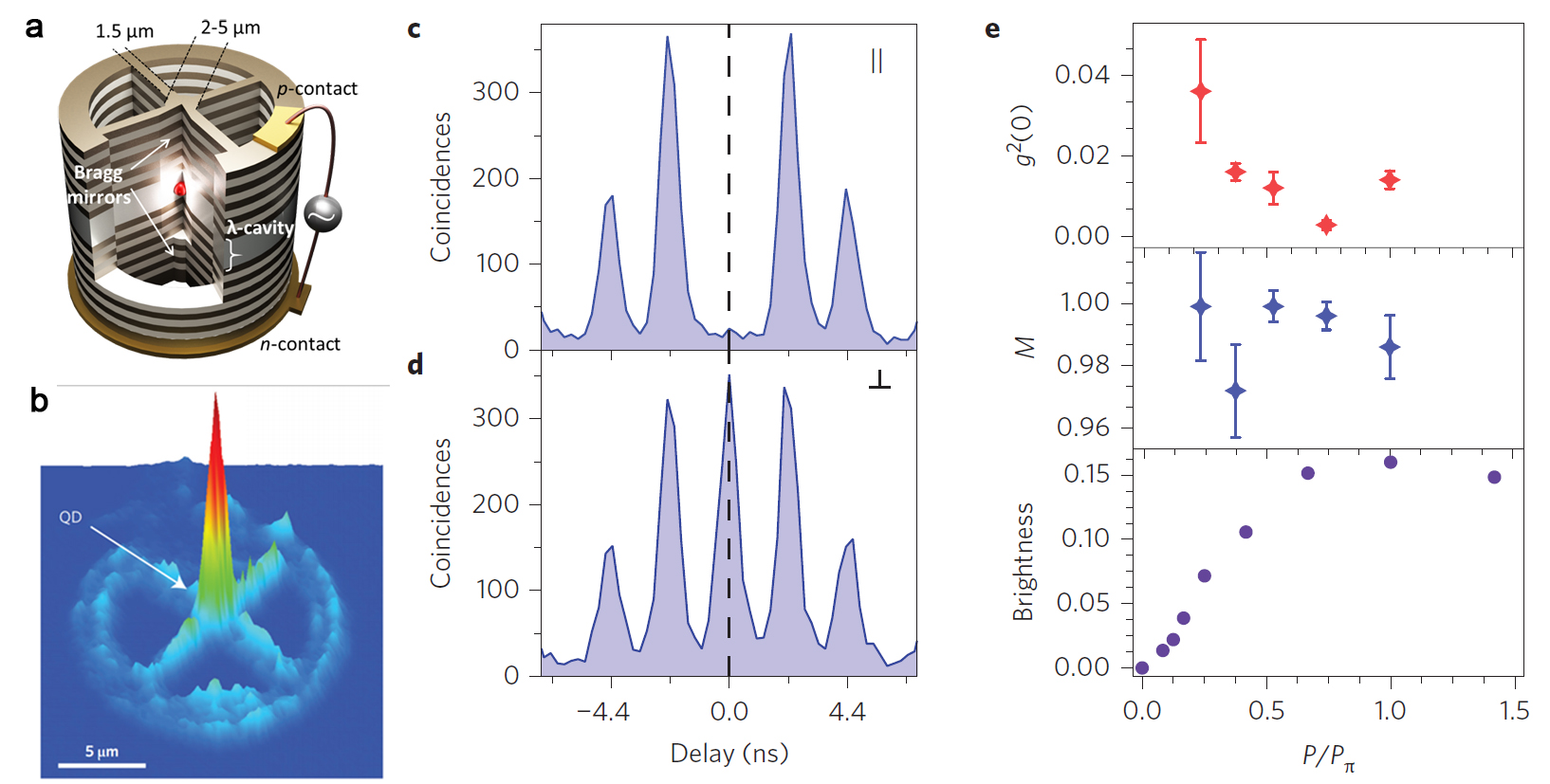 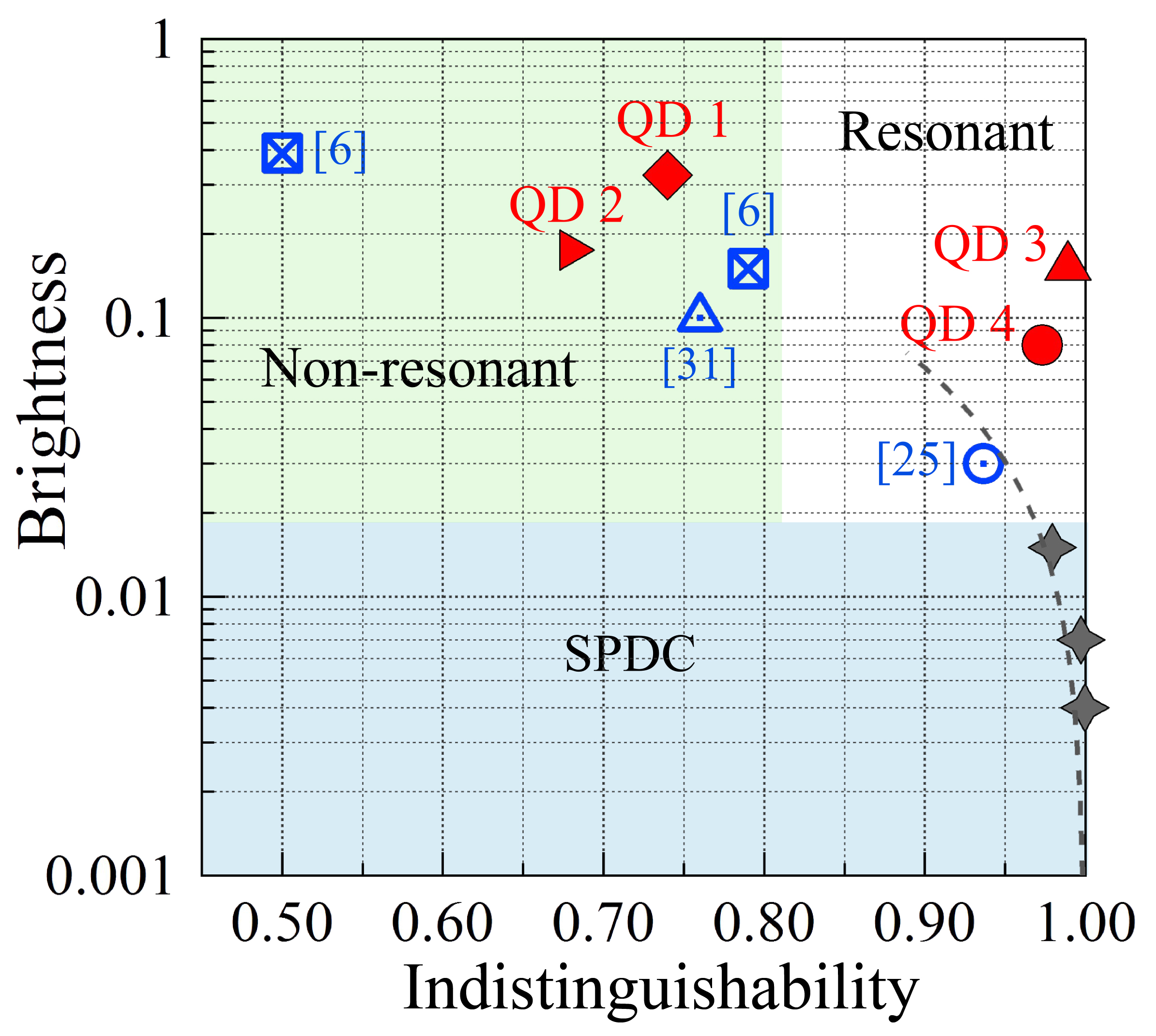 A BosonSampling device is a quantum machine expected to perform tasks intractable for a classical computer, yet requiring minimal non-classical resources as compared to full-scale quantum computers. Photonic implementations to date employed sources based on inefficient processes that only simulate heralded single-photon statistics when strongly reducing emission probabilities. BosonSampling with only single-photon input has thus never been realised. Here, we report on a BosonSampling device operated with a bright solid-state source of highly-pure single-photon Fock states: the emission from an efficient and deterministic quantum dot-micropillar system is demultiplexed into three partially-indistinguishable single-photons, with purity 1−g (2)(0) of 0.990 ± 0.001, interfering in a 6×6 linear optics network. Our demultiplexed source is orders-of-magnitude brighter than current heralded multi-photon sources based on spontaneous parametric down-conversion, allowing us to complete the BosonSampling experiment 100 times faster than previous equivalent implementations. This intrinsic source superiority places BosonSampling with larger photon numbers within near reach.

Figure: a) Second-order autocorrelation function in log scale. An ideal single-photon Fock state has a g2(0) = 0, here the authors measure g2(0) = 0.010. b)  Experimental setup of BosonSampling with a solid-state single photon source. Laser pulses centred at 905 nm excite a quantum-dot embedded in a micropillar cavity, which itself is housed in an optically accessable cryostat (Cryo) system at 13 K. A dichroic mirror (DM), and band-pass filter (BP) with 0.85 nm FWHM are used to isolate the emitted single-photons at 932 nm collected in a single-mode fibre (SMF). A passive demultiplexer composed of beam-splitters with tunable transmittances—half-wave plates (HWP), and polarising beam-splitters (PBS)—and compensating delay lines of 12.5 ns probabilistically converts three consecutive single photons into separate spatial modes, where they are directed into the BosonSampling circuit. The scattering linear network is composed of polarisers (Pol), half-wave plates, a 3×3 non-polarising fibre beam-splitter (FBS), and polarising fibre beam-splitters (PFBS), which in combination form a 6×6 mode network. Six avalanche photo-diodes (APDs) are used at the output to detect up to 3-fold coincidence events. 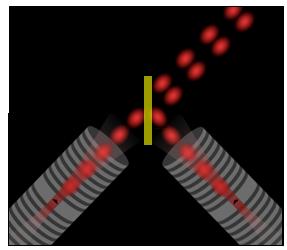 Quantum dots in cavities have been shown to be very bright sources of indistinguishable single photons. Yet the quantum interference between two such bright quantum dot sources, a critical step for photon-based quantum computation, still needs to be investigated. We have reported on such a measurement, taking advantage of a deterministic fabrication of the QD-cavity devices. We show that cavity quantum electrodynamics can efficiently improve the quantum interference between remote quantum dot sources: Poorly indistinguishable photons can still interfere with good contrast with high quality photons emitted by a source in the strong Purcell regime. Our measurements and calculations show that cavity quantum electrodynamics is a powerful tool for interconnecting several quantum dot devices.